In numbers: initial screening at the MRC-LMB protein crystallization facility 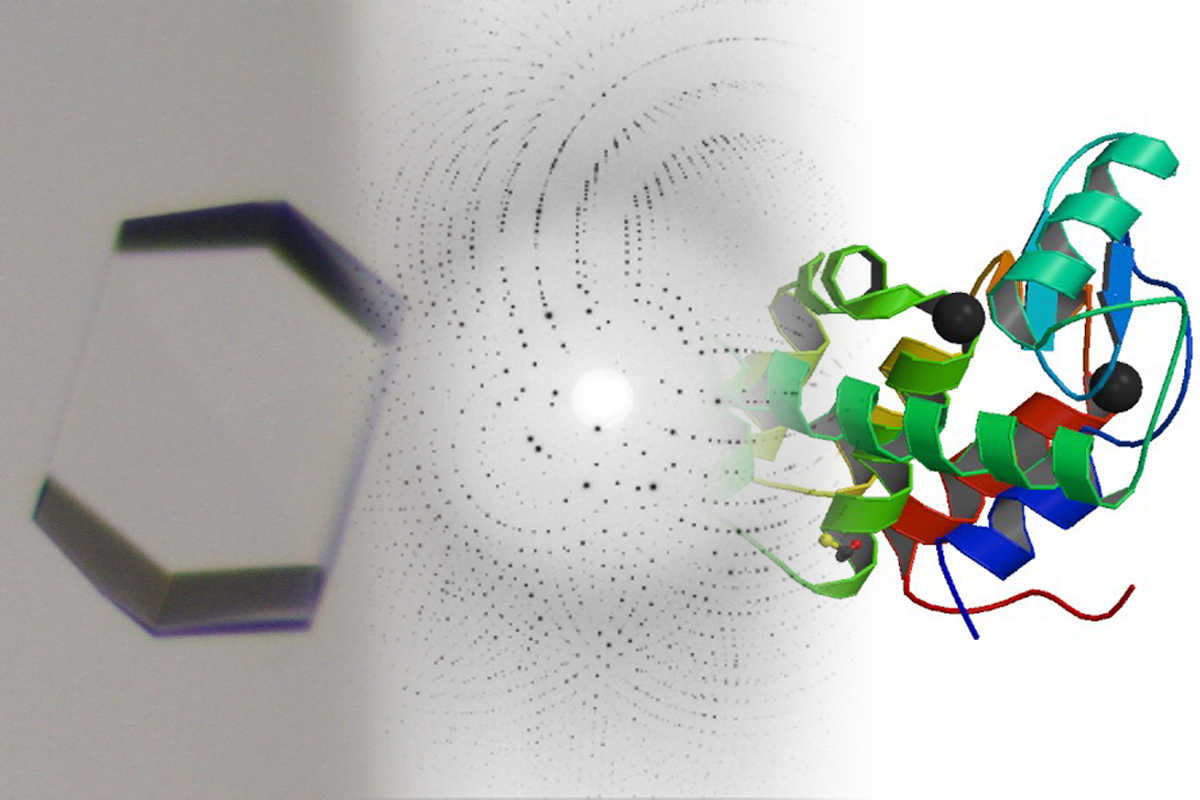 Crystallization is required for the determination of macromolecular structures with X-ray crystallography. Because the results of an initial crystallization screen using a particular macromolecular sample cannot be predicted, the approaches that lead to success can only be found empirically (Chruszcz et al., 2008; McPherson, 2017). A very low yield of useful crystals from initial screening is to be expected for the vast majority of samples. The lack of sample stability or other sample problems, such as buffer incompatibilities, can render entire initial screens unsuitable for crystallization (Jancarik et al., 2004). In addition to randomness inherent in the process, sample sensitivity to experimental fluctuations can also cause reproducibility issues during later optimizations.

One strategy to bypass some of these problems is to start with a large screen containing many different initial crystallization conditions. We have adopted such a strategy at the MRC Laboratory of Molecular Biology (MRC-LMB, Cambridge, UK), combined with an automated vapour-diffusion sitting drop technique for setting up crystallization droplets. To further simplify the process when dealing with large screens, crystallization plates pre-filled with reservoir solutions are made ready to be used (Stock et al., 2005). Currently, our complete initial screen integrates 22 x 96-well plates = 2112 separate commercially available conditions (Gorrec & Löwe, 2018). Preparing the pre-filled plates and setting up the crystallization droplets represent the largest cost of our crystallization facility.

Here, I present some statistics collected over a decade of running the facility at MRC-LMB: the numbers of plates pre-filled with initial screening kits, the resulting costs and the final yields of quality diffraction crystals. We hope the data will be useful to those thinking about setting up a facility or for comparison purposes. The numbers also highlight a recent decline caused by the advent of a competing method that eliminates the need for crystallization – cryo-electron microscopy (cryo-EM) –, which now regularly produces atomic models comparable in quality to those obtained by X-ray crystallography (Nogales & Scheres, 2015; Henderson, 2018).

Table 1 shows the number of plates pre-filled with initial screens that have been produced at the MRC-LMB over the last decade. The plates were produced by a fully automated and integrated system comprising a liquid handler (Tecan), a plate storage carousel (Tecan), an inkjet labelling printer (Markem-Imaje) and an adhesive plate sealer (Brandel) (Gorrec & Löwe, 2018). During a typical production run of the system, 72 MRC 96-well 2-drop crystallization plates (Swissci) are filled with a particular commercially available screening kit, and the process lasts around 4 hours. The system dispenses 80 µL of each reservoir solution, provided in 15 ml Falcon tubes, into the designated wells of the plate. After that, the pre-filled plates (referred to internally as 'LMB plates 1–22') are stored at 10 °C in incubators, where they are available to users.

Table 1. Production of LMB plates. Note: while moving into our new building, operation of the facility was disrupted (2012–2013)

In recent years, it can be observed that the number of LMB plates produced has decreased from a peak in 2014–2015. The main explanation is the success of cryo-EM, which has meant that many projects have shifted to this revolutionary method of structure determination at near-atomic resolution. Furthermore, at MRC-LMB, we see that for larger proteins and complexes, X-ray diffraction has almost exclusively become a supporting technique to cryo-EM when high-resolution structures of particular protein domains of interest or detailed chemistry need to be investigated. This often requires the elemental contrast offered by X-rays and anomalous scattering methods for which cryo-EM has currently no workable equivalents. In contrast, fragment screening and high-throughput structure determination of small molecule–protein complexes has remained the domain of X-ray crystallography, mostly because of the differences in resolution attainable routinely by the two methods and the speed achievable with crystallography once phases are available.

Table 2 lists the costs for consumables when setting-up droplets in an LMB plate with a stand-alone Mosquito nanoliter dispensing robot (TTP Labtech). We found that in most cases, our users set up single droplets per experiment (i.e. 96 droplets per plate), which is often required to preserve sample freshness. This also avoids the chance of carry-over and confusion around sample identity. We have calculated that the cost for consumables is close to GBP 15.00 per LMB plate (USD 20.00), including pre-filling and drop setting. This multiplies to GBP 330.00 (USD 432.00) for a complete initial screen using all 22 LMB plates. All calculations exclude the initial and running costs of liquid-handling equipment and labour.

Table 2. Consumable costs for setting up a 96-condition initial screen in LMB plates at the MRC-LMB

With a high turnover, robust equipment (i.e. with a life span of 10 years or more), in-house maintenance support and thorough optimization of the automated protocols, the costs related to equipment have been reduced significantly. We have estimated this cost to be an additional GBP 5.00 (USD 6.50) per plate at MRC-LMB. This means an overall cost of GBP 20.00 (USD 26.00) per plate excluding labour. The full production of initial screens during the financial year 2018–2019 was hence 20 x 4388 plates = GBP 87,760 (USD 115,000). This might seem a lot but should be considered in the context of projects where crystallization decides between success and failure, when so many variations of samples must be tried. It would be interesting to put this in relation to the current costs of cryo-EM structure determination, mostly caused by costly equipment and its maintenance, and expensive consumables such as grids, rings and cartridges.

Our protocols to set up crystallization droplets in a 96-well crystallization plate are relatively fast, lasting 5 min overall in most cases. In fact, the most time-consuming task is the subsequent assessment of the experiments by microscopy. There are commercially available automated imaging systems that can help with imaging and assessing the experiments, but we decided against such infrastructure. Our level of throughput would require an imager with a very large plate storage capacity and fast image processing, which would represent a very significant additional cost component. In addition, practically, we found that investigating the results through a manual high-powered and high-quality stereo microscope is still the best possible way and ensures that hopefully no crystals are missed, however small and hidden they are within the droplets.

There is no laboratory information management system (LIMS) implemented at the MRC-LMB that would enable us to collect overall statistics. We found that this can slow down progress of each user because of the additional reporting burden. For example, a crystal hit might turn out to be useless later and this information needs to be tracked (only to erase it and make overall statistics more relevant). We have hence compiled a basic web-based data mining tool instead, which essentially generates details of conditions selected by users (who will handle their records independently).

Table 3 shows examples of results from our initial screening against various samples for which useful crystals could be obtained (the degree of sample optimization rounds varied from a few to 50 constructs/variants) (Gorrec, 2015). According to this subset of data, despite our large screen size, the yield of useful crystals is below 1%. In fact, a relatively high proportion of initial screens fails to produce useful crystals, while in a relatively low number of cases, a high yield is observed. Overall statistics would hence show a (much) lower yield than what is calculated from Table 3. This might not seem to be encouraging but, again, it needs to be considered in the context of users who attempt crystallization with a broad variety of novel samples. Besides, this should be put in relation to yielding useful data from cryo-EM screening for suitable imaging conditions, which in our experience can also be frustratingly low.

Table 3. A short list of example results from users' initial screening against various samples where useful crystals were obtained. According to this subset of data, the average yield is 13/1466 x 100 = 0.89%

Based on the set of chemicals used to formulate the conditions that have been employed in earlier times (2002–2009, initial screen = 1152–1440 conditions) and the resulting published structures, it has been shown that suitable reagents and their nature/concentrations making up the conditions have virtually all the same importance in the process of structure determination (Gorrec, 2015). To us, this means that starting with the largest possible screen (given effort, cost, sample availability etc.) is to be encouraged and it has also motivated the development of further initial screen conditions (Gorrec & Zinzalla, 2018). Finally, it also means that further developments, such as the reduction in sample consumption (Wu et al., 2015), could still make a big difference in the overall success of our strategy.

The whole initial screening process at the MRC-LMB can be viewed at https://www.youtube.com/watch?v=iWbFkZUZOko