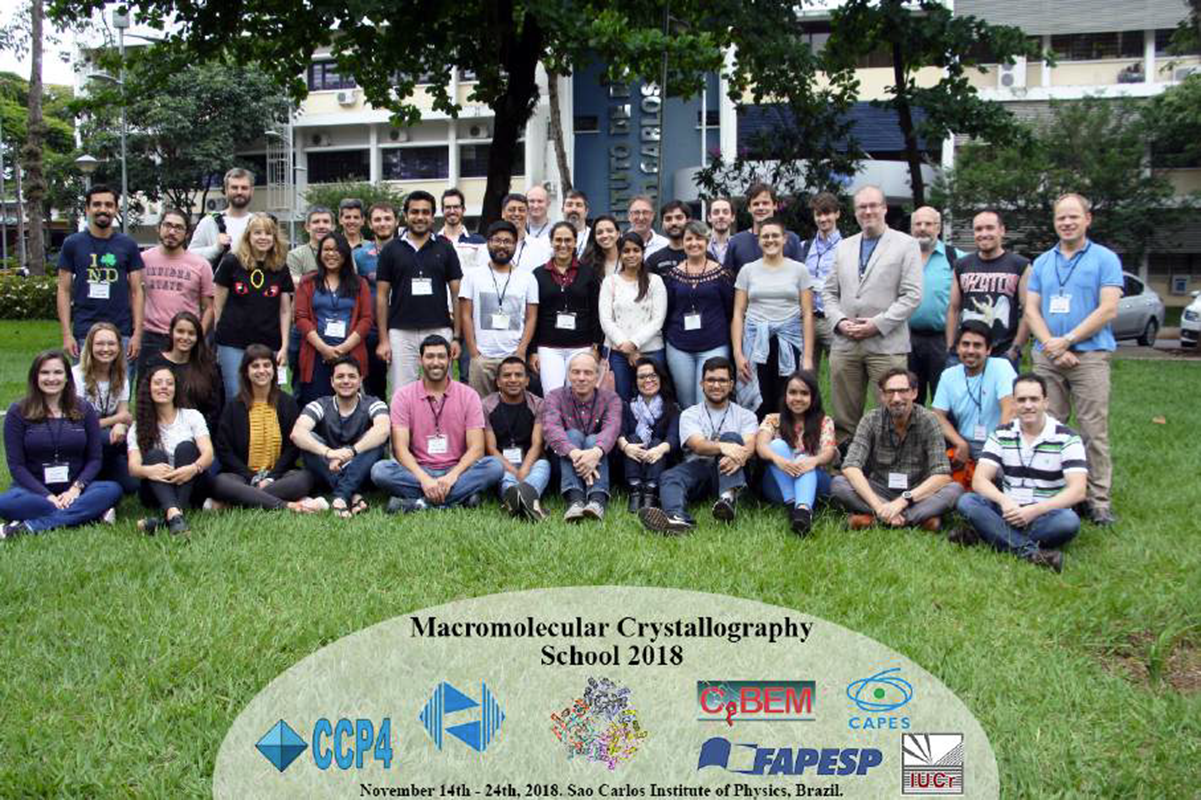 Group photo with teachers and students.

The Macromolecular Crystallography School "From data processing to structure refinement and beyond” was held at Sao Carlos Institute of Physics, University of Sao Paulo, Brazil, from 14 to 24 November 2018, and organized by João R. C. Muniz, Richard Garratt and Glaucius Oliva from the Sao Carlos Institute of Physics, and Kyle Stevenson and Ronan Keegan from STFC Rutherford Appleton Laboratory, Oxfordshire, UK. This workshop represents the continuation of the series that started in 2010 at the Institut Pasteur de Montevideo, Uruguay. As for the previous four editions in Uruguay and Brazil, the 2018 workshop was co-organized with the Collaborative Computational Project Number 4 (CCP4 - UK). We invited 18 teachers and tutors, gathering a group of leading experts in developing cutting-edge methods for protein crystallography and structural biology.

From 65 applications, we selected 24 students from seven different countries (Brazil, Mexico, Argentina, Chile, India, South Africa and UK). The oversubscription forced us to decline many good applications but it revealed that there is a need to keep this course running. Its visibility at the international level has become well established. The attendees were mostly advanced PhD students, postdocs and a few young research scientists. The idea in this respect was to prioritize people who could put this training into use in concrete research work as fast as possible.

During the workshop, lecturers guided the students through dedicated tutorials covering the main programs and state-of-the-art algorithms in macromolecular crystallography. The workshop was conceived to provide a strong theoretical background in the form of lectures, and hands-on abilities (problem-solving sessions) in the use of computational tools to exploit X-ray diffraction data (mostly brought by the students) and datasets with varying degrees of difficulty were also provided to students who did not bring their own. Particular emphasis was given to data processing, phasing/structure determination and model refinement/validation, also including, for the first time, sections on electron microscopy.

The course covered the following topics:

English was used throughout the course. Lectures were mainly scheduled in the mornings, with tutorials and hands-on practical classes in the afternoons. Practical classes were aimed at solving genuine problems brought in by the students (starting from the students’ X-ray diffraction data). Experimental data were assigned by the local organizers to the few students who had not brought their own data, so they could follow the tutorials and attempt to solve the structures during the problem-solving sessions. Two “Burning questions” sessions, as well as poster presentations (based on the students’ scientific research projects), reinforced active discussion times; the posters were on display during the whole course.

The Sao Carlos Institute of Physics is well equipped for practical structural biology courses. The Protein Crystallography Unit gives access to a state-of-the-art X-ray home source to perform single-crystal diffraction experiments under cryogenic temperatures, and other units in the institute allow for recombinant protein production/purification as well as in-solution biophysical characterizations.

It is important to highlight that most of the computational programs used during the workshop, many of them being the most widely used throughout the international macromolecular crystallography community, were taught directly by the program developers themselves, constituting a unique opportunity for intense and productive interaction. The aims of this workshop have been kept coherent since the first course in 2010, contributing to the explicit interest in consolidating continuity in a local Macromolecular Crystallography School. At the same time, we have clearly moved forward in incorporating improvements, and in keeping up to date with the latest developments in cutting-edge methods, thanks to the expertise of the participating teachers. This fulfils an urgent need to train young scientists in this discipline. This type of workshop not only allows solid training in theory and applications in biological crystallography but also fosters collaborative, interdisciplinary and inter-institutional research programs, consolidating regional networks in structural biology like the Center for Structural Biology of Mercosur (CeBEM).

The commitment of the teaching staff with the whole endeavour was outstanding, and the overall evaluation of the course was extremely positive. The social events accompanying the course - several dinners, the poster session, rafting in Brotas (a popular tourist attraction close to Sao Carlos) and the final barbecue - were very much appreciated and provided additional opportunities for informal interactions and discussions. Support from the Sao Carlos Institute of Physics, CeBEM, IUCr, Sao Paulo Research Foundation (FAPESP), CCP4 and the Coordination for the Improvement of Higher Education Personnel (CAPES) is greatly acknowledged.

For the 2020 edition, we are planning to put forward a web-based tool for interaction and dissemination of material and information, using the Moodle platform. We are also planning to include a final exam (optionally anonymous).