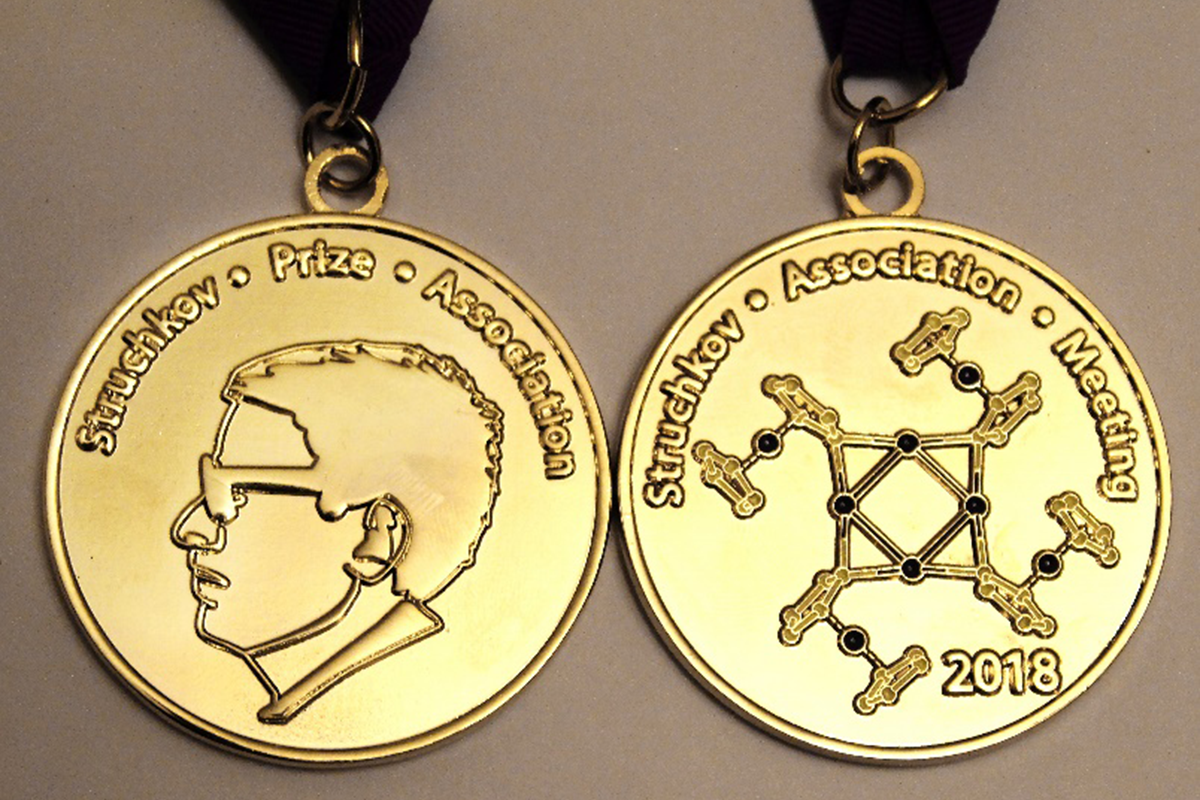 Commemorative conference medal. The front side features Prof. Struchkov’s profile and the reverse a fragment of a scientifically significant polynuclear complex whose structure was established at the INEOS X-ray Laboratory.

Better late than never. This old adage was probably on the minds of many former colleagues and students of the outstanding Russian crystallographer, Vice-President of the IUCr from 1993 to 1995, Yuri Struchkov (1926–1995), when they assembled on 13–16 November 2018 for the Second Struchkov Meeting, the International Workshop on Chemical Crystallography and Structural Biology. This is the first time this meeting has been held in Moscow, Russia, where Prof. Struchkov lived and worked all his life. The conference continued the tradition of gathering the students and colleagues of Prof. Struchkov to share their new and inspirational scientific achievements as well as precious memories of former collaborations. The first meeting took place more than 10 years ago in Chicago, IL, USA; see IUCr Newsletter (2007). 15(3), 17. The current, Second Struchkov Meeting was supported by the Russian Academic Excellence Project “5-100” and hosted by Peoples’ Friendship University of Russia (RUDN University). The conference's organizational efforts were spearheaded by the Research Institute of Chemistry and Inorganic Chemistry Department of RUDN University chaired by V. N. Khrustalev, himself a former colleague of Prof. Struchkov.

On the opening day, after greetings from the Conference Organizing Committee presented by T. V. Timofeeva (New Mexico Highlands University, Las Vegas, NV, USA) and the latest announcements from the Chairman of the Struchkov Prize Panel, L. A. Aslanov (Moscow State University, Moscow, Russia), plenary lectures by I. A. Litvinov (Arbuzov Institute of Organic and Physical Chemistry, Kazan, Russia) and S. K. Byram (Bruker AXS Inc., Madison, WI, USA) gave historic accounts of Prof. Struchkov’s role in the development of organic crystal chemistry as well as the spread and proliferation of crystallographic instrumentation in the Soviet Union and, later, Russia. Subsequent lectures in the first three days were primarily delivered by former colleagues of the Institute of Organoelement Compounds (INEOS) X-Ray Laboratory, founded by Prof. Struchkov in the 1970s. The talks encompassed many scientific areas, illustrating the scope of modern day studies of members of Prof. Struchkov’s school. The speakers offered serious scholarly assessments of the state of diverse subjects, mostly constructed along the then-vs-now model. Most presenters also took the opportunity to offer personal historical insights and a good measure of nostalgic reminiscences, which always elicited vivid reactions from the understanding audience. The majority of the participants share more than common scientific interests and memories; they regularly make contributions toward the financial and organizational support for the Struchkov Prize, an annual award bestowed upon a young Russian scientist for the best work in a field related to crystallography. This prize was established soon after the untimely death of Prof. Struchkov, see IUCr Newsletter (2000). 8(4), 18, and awarded for the 22nd time in the fall of 2018. Many of the award laureates have become well-known scientists and leading authorities in their respective fields ranging from inorganic chemistry to biology and engineering. Their impressive achievements were highlighted on the fourth day of the conference in a special session featuring talks by the former Struchkov Prize winners. All the speakers at the Conference received commemorative medals (see photo at the beginning of the article).

The particulars of the conference, including the book of abstracts, are available here.

The participants and, perhaps even more importantly, organizers closed the conference with a firm commitment to make it a regular event happening at least every 3–5 years. The organizers overcame many financial and logistical difficulties to hold this truly remarkable meeting. We are confident that the Struchkov Prize Society will build on this success and that the next meeting will eventually happen.