A great day for crystallography in Benin 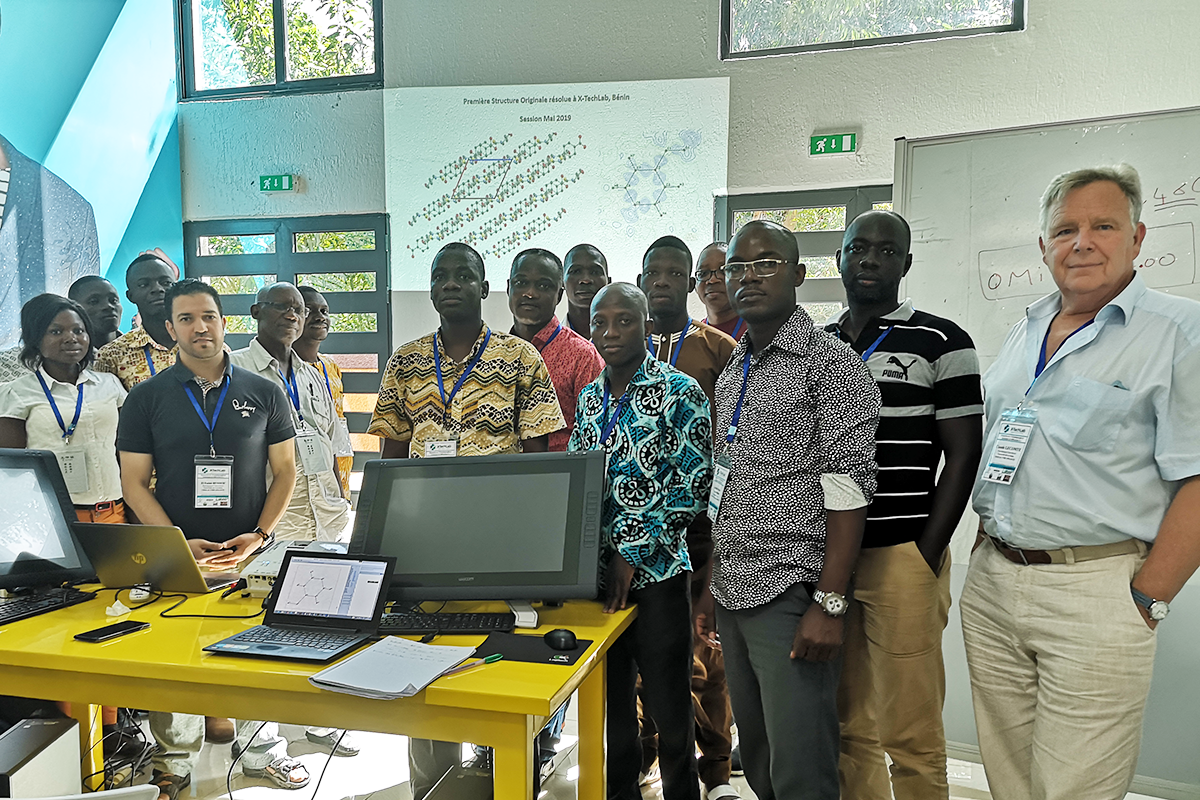 Some of the researchers who participated in the event.

On 23 May 2019, the first crystal structure of a molecule synthesized and crystallized at the University of Abomey-Calavi in Cotonou, Benin, was solved during a crystallographic training session at the X-TechLab in Sèmè City, Benin, organized within the framework of the IUCr-UNESCO OpenLab in partnership with Bruker and LAAAMP.

Thirty students (PhD students, researchers and professors) took part in the training session, half of whom were from Benin and the other half from Burkina Faso, Togo, Congo-Brazzaville, Senegal, Cameroon and Chad. The IUCr provided EUR5000 for bursaries. Geometric crystallography and X-ray diffraction were taught during the first week, while the second week was devoted to hands-on single-crystal (14 participants) and powder (16 participants) diffraction.

All students who attended the school path on single-crystal diffraction collaborated in the solution and refinement of the crystal structure, under the supervision of Dr Bendeif. The compound studied was 4-(morpholine-4-carbonothioyl)benzoic acid (C12H13NO3S), a thioamide compound, in particular a morpholino(phenyl)methanethione derivative. These molecules inhibit the activity of the enzymes monoacylglycerol lipase and fatty acid amide hydrolase, with beneficial effects for anxiety, pain and neurodegenerative diseases, such as Alzheimer’s disease. For more information, see the Appendix below. The research team plans to submit its findings to Acta Crystallographica.

Three other original structure determinations of compounds synthesized in Cameroon were performed, which are also of publishable quality even though the data were collected at room temperature.

The staff of X-TechLab, and of Sèmè City, provided us with very modern teaching equipment and we also had a Bruker D8 QUEST ECO single-crystal diffractometer equipped with the latest version of the Photon II detector at our disposal. In addition, the school benefitted from free access to the Cambridge Structural Database (CSD) and related software through the CCDC FAIRE programme, and to IUCr Journals and International Tables for Crystallography through the IUCr Journal Grants Fund.

The general atmosphere was excellent with a lot of interested participants who asked many questions during this two-week training session (from 9 am to 8 pm!). At the end of the school, most participants were able to solve and refine crystal structures (the single-crystal group) or analyse the powder data files (the powder group) using the best freely available software. Professor Lecomte, who is Chair of the IUCr Crystallography in Africa initiative, expressed his gratitude to the school tutors, in particular Dr Bendeif, and to Bruker.

We synthesized the title compound, a novel molecule, to study its pharmacological properties, and have reported the effect of the K-10 catalyst on the green synthesis approach used (Agnimonhan et al., 2017). On 23 May 2019 during a crystallographic training session at the X-TechLab in Sèmè City, Benin, its crystal structure – which to our knowledge has never been studied previously – was determined by single-crystal X-ray diffraction analysis at 273 (2) K on a Bruker D8 Quest diffractometer. The compound crystallized in the monoclinic P21/n space group.