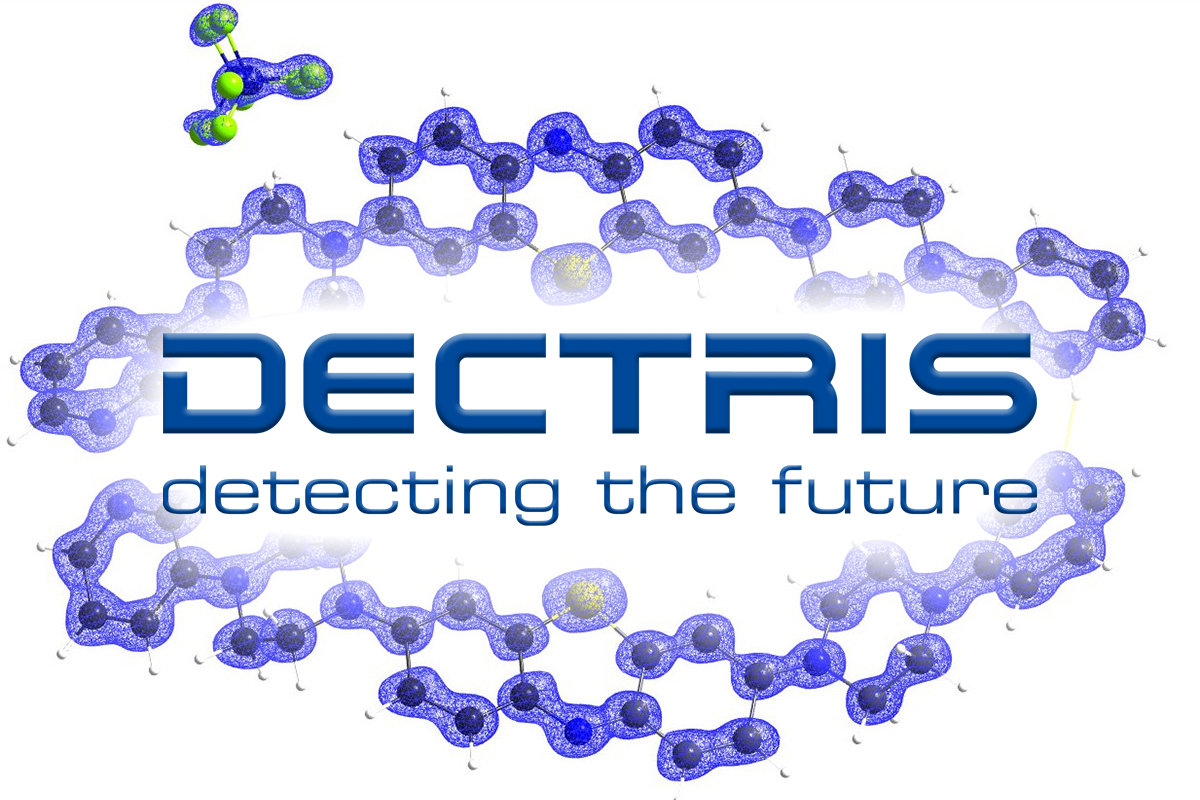 In the past six months we have witnessed a surge of interest in electron diffraction. An increasing number of papers have described the use of this technique to solve crystal structures from samples that were previously thought beyond the reach of X-ray diffraction, with an ease and speed that made commentators wonder why this hadn't been done before. Here, we are going to review recent developments in the field, address outstanding questions and give an outlook for the near future.

The structural information that synthetic chemists and the pharmaceutical industry need is often extracted from crystalline material using X-rays. Single-crystal X-ray diffraction is a mature technique that gives the most detailed structural information. The bottleneck lies in the sample itself: the steps required to obtain a crystal suitable for data collection are hard to control. A crystal must be well ordered and sufficiently large to give useful diffraction spots. Obtaining such a single crystal is not trivial and largely depends on the behavior of the compound(s) under study, in particular their homogeneity and flexibility. This is a particular problem for macromolecular samples, but even smaller molecules do not always crystallize sufficiently well.

MicroED exploits two key features of electrons: their short wavelength and their strong interaction with matter. In a typical transmission electron microscope (TEM), electrons are accelerated to energies of 200 or 300 keV, giving wavelengths of 0.025 and 0.020 Å, respectively. Atomic resolution is thus within the reach of all modern TEMs. The strong interaction of electrons with matter means that much less diffracting material is required to obtain strong reflections.

The physics of electrons is nothing new. The recent excitement around MicroED stems from the fact that it is now technically possible to collect accurate diffraction data from microcrystallites with dimensions around 100 to 500 nm and to process and analyze these data to obtain atomic structures. Materials that crystallographers would dismissively qualify as powders frequently turn out to be microcrystalline, with crystallites of dimensions of the order of a few dozen to a few hundred nanometres. Although they might be invisible to the naked eye, these microcrystals are excellent targets for MicroED.

MicroED can be done using TEMs, which are in common use in laboratories (see Figure 1). In these instruments, hundreds of crystals can be deposited and screened on one 3 mm disk used as a support (the “grid”), a process that can be automated to some extent. Once a good crystal is found, data collection takes only a few seconds when using hybrid pixel detectors for direct electron detection in shutterless mode (Smeets et al., 2018; Heidler et al., 2019). If throughput is not an issue, the use of standard charge-coupled devices can provide good results within less than 15 min per compound, as illustrated in a recent paper by the Gonen group (Jones et al., 2018), which has been successfully using MicroED on protein nanocrystals since 2013 (Shi et al., 2013). 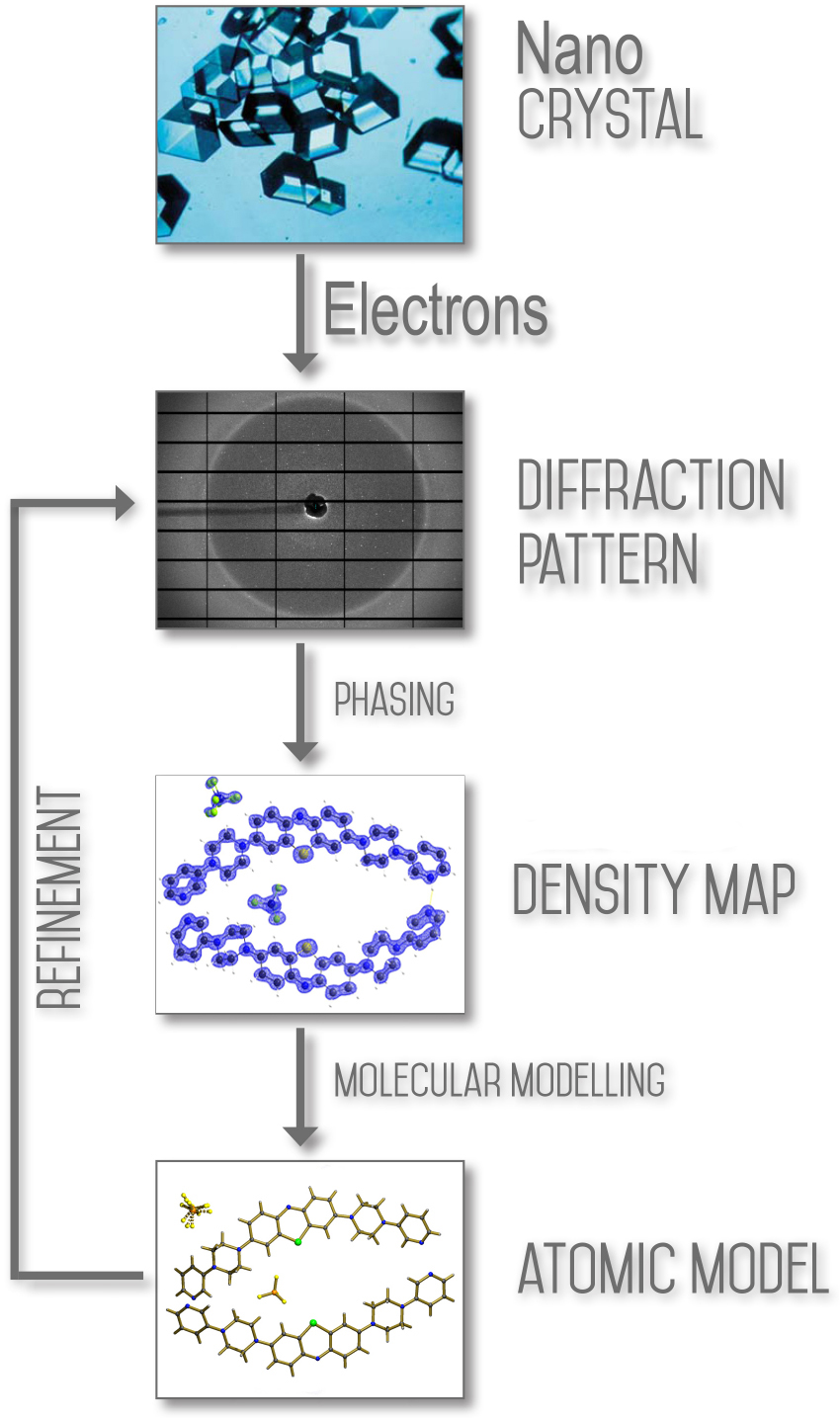 Figure 1. The MicroED workflow. Tiny crystals, less than half a micron in thickness, can be found in imaging mode and then exposed to electrons in diffraction mode using the rotation method. After indexing and integration, phases are calculated by direct methods or molecular replacement.

Recent MicroED highlights include the structure of a previously uncharacterized organic compound, a new methylene blue derivative, that was determined in a semi-automated and cost-efficient experiment, similarly to what is routinely achieved in modern structural chemistry labs equipped with X-ray diffractometers (Grüne et al., 2018). Grüne and colleagues also demonstrated the potential of MicroED as an important tool in the courtroom. When it comes to identifying polymorphs, crystal structures determined with MicroED can provide clearer answers than those determined with powder X-ray diffraction (Figure 2). At the 31st Meeting of the European Crystallographic Association in Oviedo, Spain, in 2018, Joel Bernstein (Ben-Gurion University, Beer-Sheva, Israel) stated that "the existence of multiple crystal forms such as polymorphs, solvates, hydrates etc., is playing an increasingly important role in establishing and protecting intellectual property rights in the pharmaceutical industry".

Figure 2. The process of applying MicroED to a pharmaceutical compound. The active ingredient (paracetamol) in the commercially available common cold remedy Grippostad® was analyzed from powder taken directly from the drug capsule. The process of determining the structure at atomic resolution took less than 30 min from sample preparation to visualizing the molecule (Grüne et al., 2018).

A major problem of MicroED data is poor statistics. R values are much higher than in X-ray crystallography. The reasons for this include hardware optimized for imaging, algorithms written for X-ray diffraction data, poor scaling, and background caused by inelastic and multiple scattering events. Despite the poor statistics, atom identities can be distinguished with MicroED data (Palatinus et al., 2017), as long as the resolution is high enough (see Figure 3). MicroED has been used to solve the structure of more than 40 known proteins and new oligopeptides (Nannenga & Gonen, 2019) as well as novel proteins (see Figure 4 and Xu et al., 2019). There tend to be no differences between structures determined by MicroED and those determined by X-ray crystallographic techniques.

Figure 4. (a) Overall structure of the dimeric assembly of SaR2lox (which is the physiological oligomerization state of the protein in solution). (b) Electrostatic scattering potential maps 2Fo-Fc (blue, contoured at 1 sigma) and Fo-Fc (greed/red, contoured at 3 sigma) shown for residues 142 to 152 (Trp142 - Pro152, carbon cyan, oxygen red, nitrogen blue). (c) Simulated annealing composite omit map (magenta, contoured at 1 sigma) shown for the same residues. We acknowledge Max Clabbers (Stockholm University, Sweden) for providing us with this figure, modified from Clabbers et al. (2019).

To improve the quality of the data that can be obtained with MicroED, a specifically designed tool with a high degree of automation and integration is required. This would also be indispensable for the high-throughput workflows in structural chemistry and pharmaceutical laboratories. Grüne and collaborators have suggested design guidelines for such an electron diffractometer (Heidler et al., 2019; see Table 1). Some of these features are already available in certain TEMs that can thus be adapted for MicroED. For a commercially successful electron diffractometer, these elements need to be individually optimized and matched to provide the necessary speed and data quality for MicroED and an optimal user experience.

Two of the improvements identified by Grüne and co-workers, parallel illumination (also called Köhler illumination, see Benner & Probst, 1994) and in-column energy filters, were available as standard configuration in medium-range TEMs manufactured by ZEISS. Since ZEISS stopped TEM production in 2013, these configurations have been available only in costly high-end systems, even though this configuration would be desirable for a cost-effective electron diffractometer. Parallel illumination ensures that only a small portion of the sample is illuminated when imaged, which avoids overall pre-irradiation of surrounding unexplored areas. It also avoids image distortions while keeping the beam incidence perpendicular at every point of the specimen, and provides a very useful simple switchover from TEM to scanning TEM mode (useful for observing tiny crystals at low magnification).

Energy filters remove inelastically scattered electrons, which improves the signal-to-noise ratio (Yonekura et al., 2002; 2019). The energy filter also plays a role in the sample selection, in the sense that sample thickness can be measured directly and quantitatively. In addition, as a thin planar crystal is rotated along its plane axis, the electron path through it increases and with it the inelastic scattering cross-section. Use of an energy filter would mitigate this effect and lead to better data. Thicker crystals could in principle be analyzed with higher-energy electrons, but this would increase the overall cost of the dedicated electron diffractometer. An acceleration voltage of 120 keV is sufficient for good MicroED data (cf. the work of Gemmi’s group in Pisa, Italy; Lanza et al., 2019).

The detector is another important element in a dedicated electron diffractometer. With a readout speed greater than 2000 frames s-1 and no dead time, hybrid pixel detectors would synchronize very well with an optimized precision goniometer, similar to those used in X-ray crystallography, and allow for high-throughput operation.

The dynamic range of the detector is important to accurately record reflections with vastly different intensity values (four to six orders of magnitude). This requires a dynamic range of at least 20 bits, which is provided only by electron-counting devices of the hybrid pixel type, such as Medipix-based detectors and PILATUS and EIGER (Brönnimann & Trüb, 2019), which are widely used in high-energy physics and X-ray crystallography.

Another aspect of a successful electron diffractometer is tightly integrated software for instrument control and data analysis. Here, great progress has already been made by a few groups. For example, the SerialED software suite (Smeets et al., 2018) can control both the beam and the detector to successfully perform serial electron crystallography at a staggering rate of 3500 crystals per hour. The software is open source, and the lab also shared a suite for offline data processing.

Once the technical aspects of MicroED have been addressed, MicroED will become increasingly useful for structural chemistry and structure-based drug design. It is likely to fill the gap between single-crystal and powder X-ray diffraction, and make structure determination faster and easier. Will it replace X-ray diffraction? The two techniques have complementarities that will not disappear any time soon. X-ray crystallographic techniques provide data of the highest accuracy for crystals in the micrometre range. If crystals cannot be grown to this size, MicroED can be used to determine their structures.

The time when electron diffraction will match X-ray diffraction as a method for structural chemistry and pharmaceutical development is getting closer and closer!