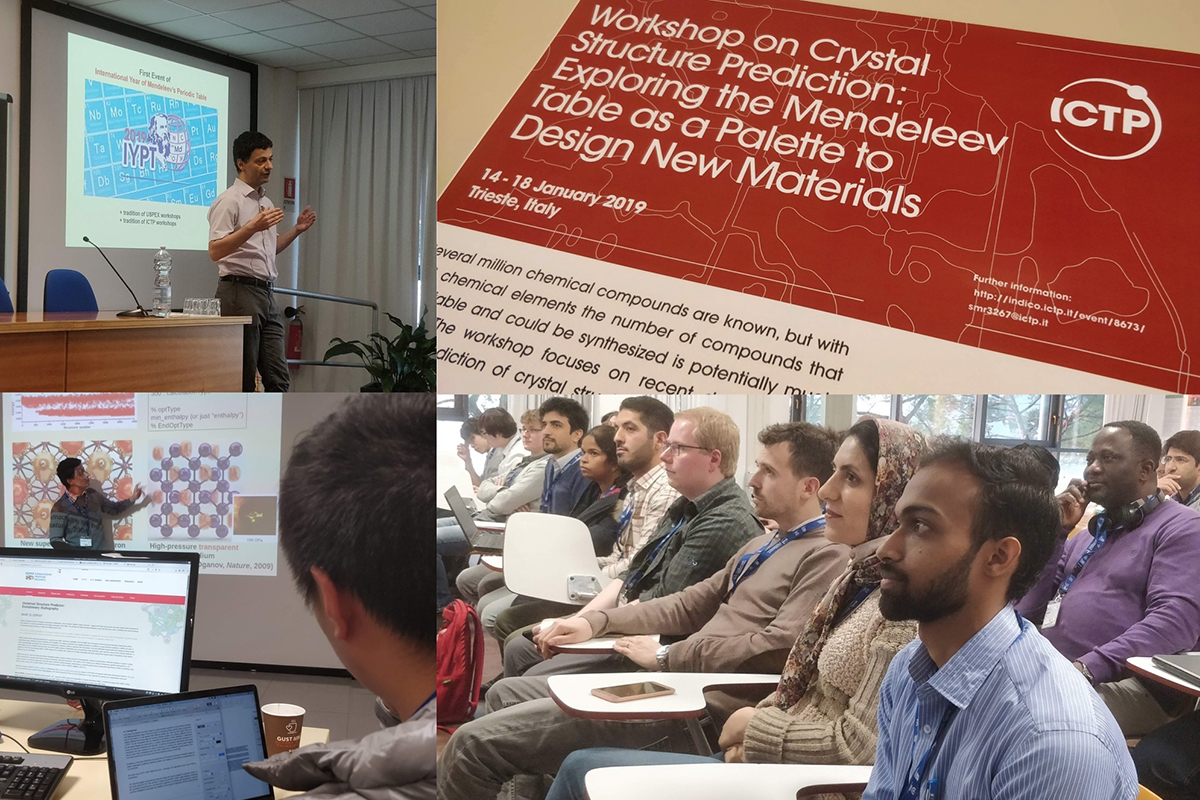 Thanks to enormous progress in computing power and algorithm development, we are now closer to being able to predict the crystal structure of any material from the simple knowledge of its composition. This is the first necessary step for predicting in silico the property of a material and planning modifications that could improve these properties. A critical discussion of the algorithms developed in the last few years for the in silico prediction of crystal structures was the main theme of a workshop that took place at the Abdus Salam International Centre for Theoretical Physics (ICTP) in Trieste, Italy, from 14 to 18 January 2019. The event, titled “Workshop on Crystal Structure Prediction: Exploring the Mendeleev Table as a Palette to Design New Materials”, focused in particular on approaches based on molecular modelling and was an opportunity to celebrate 2019 as the International Year of the Periodic Table, as crystal structure prediction is rooted in a deep knowledge of the properties of the atoms, and, in turn, numerous discoveries made with the help of crystal structure prediction reveal new (often completely unexpected) sides to the behavior of the atoms.

The workshop was directed by A. Laio (Trieste), G. Desiraju (Bangalore) and the authors of this report. It was divided into two parts: the first three days were dedicated to an in-depth and critical discussion of the methods with talks given by world experts in the field. The last two days were devoted to “hands-on” computer labs where the younger participants were given the opportunity to learn how to use the most advanced codes for crystal structure prediction, including “Universal Structure Predictor: Evolutionary Xtallography” (USPEX) and “Ab initio Random Structure Searching” (AIRSS).

The presentations highlighted methodological aspects as well as recent applications of the different methods, especially methods based on evolutionary algorithms such as USPEX (talks by Oganov, Allahyari, Kvashnin and Zhu), methods based on random sampling such as AIRSS (talks by Pickard and Schusteritsch), enhanced molecular-dynamics methods such as “metadynamics” (talks by Martonak and Piaggi), and basin-hopping methods (talk by Goedecker). Data-mining and data-based approaches were discussed by Villars and Ghiringhelli. The relevance of machine-learning methods, especially neural networks, was emphasized by many speakers, and especially by Isayev, Deringer and Kucukbenli. The hands-on sessions were led by Kucukbenli (on “Quantum-Espresso”), Allahyari (on “USPEX”) and Schusteritsch (on “AIRSS”). M. Ferri, S. Laporte and Y. Shaidu, PhD students at the International School for Advanced Studies (SISSA), provided supplementary support to the students.

Mike Glazer (Oxford), former Vice-President of the IUCr, gave a colloquium titled “Crystallography: Then, Now, and …..?”. The colloquium took place in the main lecture hall of the ICTP and was open to the entire ICTP scientific community. It was an opportunity to review the history of crystallography and highlight the important contributions given by the field to science and society.

Of the 78 participants, 23 gave lectures and 55 younger attendees presented posters and attended the hands-on tutorials. In line with the mission of the ICTP to be a global hub for science with a special regard for the developing world, participants came from 25 different countries including Cameroon, Iran, Nigeria, Congo, Argentina, Iran, Colombia and India. The workshop was co-sponsored by the European network “Psi-k”.

Artem R. Oganov is a Full Professor at the Skolkovo Institute of Science and Technology, Moscow, Russia. Sandro Scandolo is a Senior Research Scientist at ICTP, Trieste, Italy.