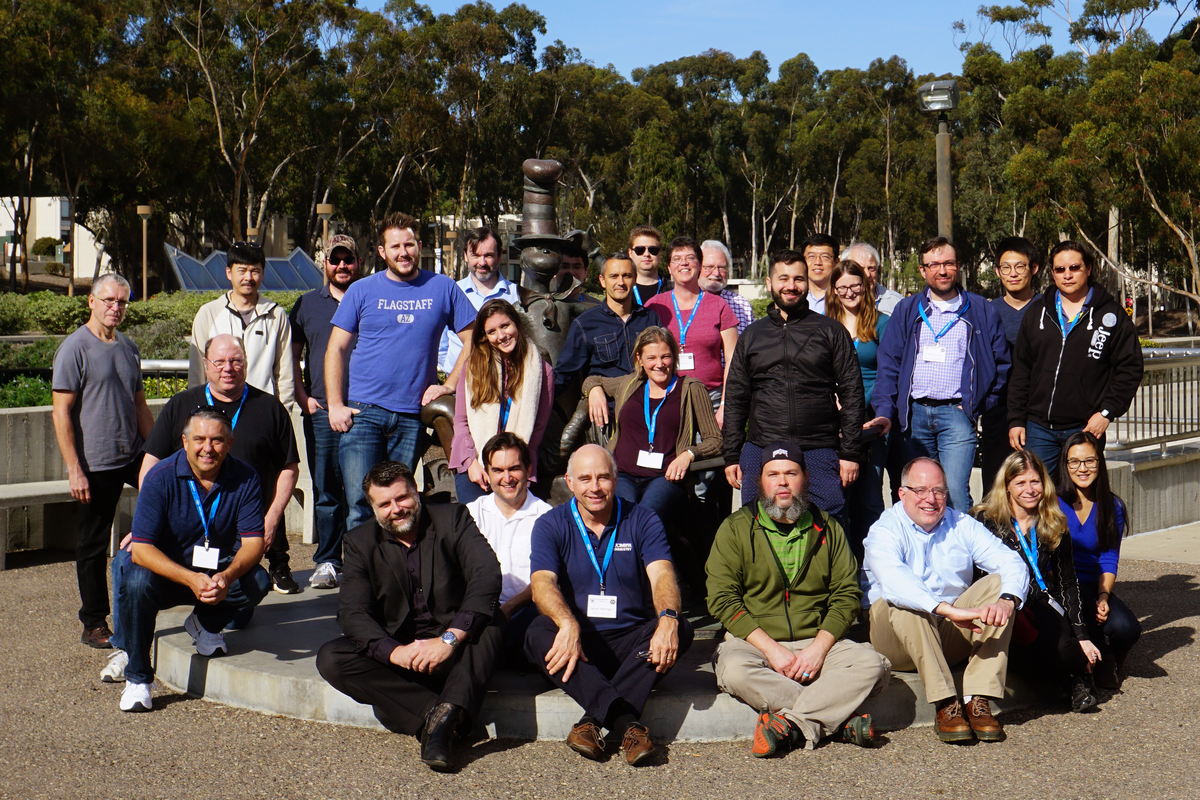 Nearly 30 crystallographers from academia, industry and government labs recently gathered for the 2018 Jana Modulation Workshop organized and hosted by Milan Gembicky and Curtis Moore of the University of California, San Diego, USA. The workshop was led by Václav Petříček and Michal Dušek of the Czech Academy of Sciences, two of the co-authors of the Jana2006 software. The participants came from a wide variety of backgrounds including chemistry, geology and materials science, and their experience level ranged from graduate students to emeriti faculty. More than half a dozen US states, two Canadian provinces and three other foreign countries were represented.

Workshop participants were introduced to the Jana2006 software and to the concept of modulation through a combination of lectures and step-by-step activities that they worked through on their own computers individually or in pairs. To familiarize themselves with Jana2006, the attendees first learned how to solve and refine non-modulated structures from both single-crystal and powder data. As they gained confidence and experience, more advanced concepts were introduced to the exercises. By the end of the four-day workshop, which ran from 10 to 13 December 2018, participants were modeling twins and various modulation functions, and visualizing the results in Diamond and Vesta. Everyone was sent back to their universities or companies with several more datasets to continue practicing.

In order to make sure that participants had all the necessary tools to generate and process their own datasets in the future, several other software packages were also demonstrated and distributed during the workshop. Jim Britten of McMaster University, Hamilton, Canada, gave a lecture on Max3D, a powerful program for visualizing reciprocal space in three dimensions. Because Jana2006 can handle data from virtually any diffractometer, Bruce Noll of Bruker AXS and Eric Reinheimer of Rigaku Americas each gave lectures to demonstrate best practices for collecting and processing crystallographic data using the APEX3 and CrysAlisPRO software suites, respectively. Dr Gembicky reinforced the message of their lectures - the importance of proper collection and processing strategies - by leading everyone through a hands-on integration and scaling of modulated single-crystal data. All of these lecturers made themselves available for one-on-one interactions with the workshop participants throughout the meeting.

The formal instruction periods of the workshop were supplemented with a number of social activities to promote networking among the participants. Each day started with a continental breakfast in the lecture hall, where everyone could mingle and discuss science with the other attendees. These discussions continued during the coffee breaks, as well as the three lunches and two dinners that were provided to the attendees. The UCSD crystallography lab, known as Diffractopia, was open before, during and after the workshop, and several people brought challenging crystals from their home labs to run on one of the nine state-of-the art, custom-built diffractometers in the UCSD facility. Tours of other famous UCSD landmarks, including the Geisel Library and the Fallen Star House were offered, as was a sunset hike through the Scripps Coastal Reserve near campus. No matter what their experience level and research interests were, everyone who came to this workshop learned something new and left a better scientist.