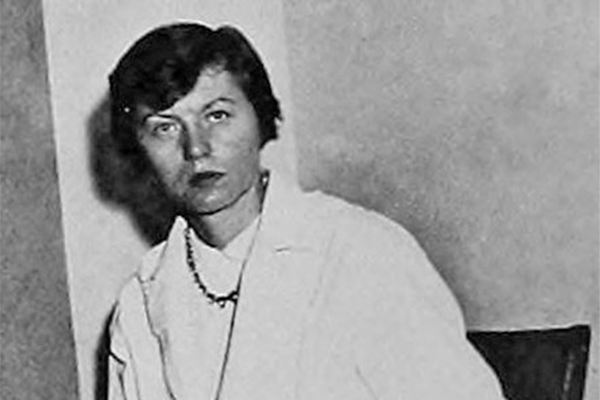 Barbara Wharton Low, Emeritus Professor at Columbia University, New York, USA, passed away on 10 January 2019, aged 98 years. She was an X-ray crystallographer who played an active role in the determination, with Dorothy Hodgkin in 1949, of the previously contested chemical formula of the important antibiotic penicillin. She then went to Caltech and worked in the laboratory of the X-ray crystallographers Linus Pauling and Robert Corey. There, in 1952, she reported her discovery of an additional manner of polypeptide folding in proteins to that of the α-helix; she named it the 'π-helix.' Since that time she was an Assistant Professor of Physical Chemistry at Harvard University in Boston where she was among the first to introduce X-ray diffraction studies of crystalline proteins into laboratories in the United States. Then, in 1956, she moved to Columbia University of Physicians and Surgeons in New York where she continued studies of protein structure, becoming a full Professor in 1966. She remained there until her retirement in 1990. A much admired teacher and mentor, she continued to lecture there for most of the rest of her life.

Barbara was born in Lancaster, England, on 23 March 1920. She was a bright student, interested in science, and studied chemistry at Somerville College, Oxford University, with Dorothy Crowfoot Hodgkin as her tutor and mentor. Barbara obtained a BA degree in chemistry in 1946 and stayed on for graduate research in Dorothy Hodgkin's laboratory, obtaining a DPhil degree from Oxford University in 1948.

Barbara did her undergraduate and graduate experimental studies with Dorothy Hodgkin on penicillin. The antibiotic activity of penicillin had originally been discovered by Alexander Fleming in 1928, and was being studied extensively in England and the United States. It had been first used on patients in 1943 and had served well in eliminating infections in many patients. In Oxford, penicillin research was led by Howard Florey, Norman Heatley and Ernst Boris Chain. Ernst Chain worked on its purification and managed to crystallize its sodium salt. He gave Dorothy some crystals, and those were the ones that Barbara worked on.

The chemical formula of penicillin, uncertain at that time, was eventually found as the result of collaborations between Dorothy Hodgkin and Barbara Low at Oxford University with Charles William Bunn and Anne Turner-Jones at Imperial Chemical Industries (its Alkali Division in Winnington, Northwich). However, these were the early days of structure determination by X-ray diffraction of crystals, and the work was difficult and hard because there were so many experimental data to deal with and computational equipment was just beginning to be used for such types of scientific research. Techniques for interpreting the diffraction data in terms of molecular structure were being worked out from day to day. The use of Beevers–Lipson strips, which provided a method for calculating electron-density maps, took much time, whereas this has become much quicker since computer programs have become available. Penicillin was one of the largest structures studied at that time. This work in Oxford was described in more detail by Georgina Ferry in her book Dorothy Hodgkin: A Life, published by Grant Books in 1998.

The resulting structure of penicillin that was determined in Oxford, however, was highly significant because the chemical formula for penicillin had not been known before the X-ray diffraction studies were completed. The crystal structure showed that penicillin contained a four-membered β-lactam ring fused to a five-membered ring – an overall structure that is very active chemically (and favored by Howard Florey in Oxford and by Professor Woodward at Harvard). This finding of a β-lactam ring was appropriate for its biochemical action of interference with the three-dimensional structure within bacterial cell walls. The Oxford Professor of Chemistry, Sir Robert Robinson, was convinced, however, that penicillin had a different formula – that of a less-active thiazolidine-oxazolone structure (two five-membered rings connected by a single bond). It was therefore suggested that maybe the X-rays used in the diffraction experiment had caused the conversion of penicillin from an oxazolone to a β-lactam structure. To satisfy the questioning chemists, Dorothy and Barbara were able to show that their crystals of penicillin after exposure to X-rays (and proven to have the β-lactam structure) were the biologically active form of penicillin; they did not start with a thiazolidine structure that had been damaged (and therefore converted to β-lactam structure) by X-ray exposure during diffraction studies. The chemical community then accepted the formula that Dorothy and Barbara had found.

This crystal structure was published in 1949 (70 years ago) in an article entitled 'The X-ray Crystallographic Investigation of the Structure of Penicillin' by D. Crowfoot (Hodgkin), C. W. Bunn, B. W. Rogers-Low and A. Turner-Jones, in a book entitled The Chemistry of Penicillin, by H. T. Clarke, J. R. Johnson and R. Robinson (Princeton University Press). The Nobel Prize in Chemistry 1964 was awarded to Dorothy Crowfoot Hodgkin 'for her determinations by X-ray techniques of the structures of important biochemical substances', and penicillin was one of these compounds. The determination of the chemical formula in World War II was a very significant event, leading to the possible chemical synthesis of the compound and the design of more active derivatives, thereby saving the lives of many wounded soldiers.

Barbara then came to the United States and continued structural studies in the laboratory of Linus Pauling and Robert Corey at Caltech in Pasadena, California. She became interested in current structural studies of helical folding in proteins by these professors, and what it indicated about protein structure. Her primary studies led to her finding of the π-helix in which each N–H group forms a hydrogen bond with a C=O group of an amino acid five residues earlier in the polypeptide chain. This helix, which she described in 1952 while at Harvard, was different from the α-helix that Linus, Robert and Herman Branson had proposed as a prominent form of polypeptide folding in the spring of 1951. Her graduate student, Richard B. Baybutt, had modeled the π-helix by accident while he was building an α-helix, and Barbara had recognized the importance of this alternate hydrogen-bonded arrangement. Whereas a π-helix is much less common in proteins than an α-helix, it has been found that the addition or deletion of a single amino acid in a protein can be sufficient to interconvert α-helices and π-helices. This relationship may be important in evolutionary changes in protein function. When the π-helix is found in certain proteins it appears to facilitate their action, for example, by helping bind a metal ion that enhances the activity of the protein (as in lipogenase) or forming a hump in an α-helix. Barbara described this π-helix at the Pasadena Conference on the Structure of Proteins in 1953.

Barbara moved to Harvard (1948-1956) and became an Assistant Professor of Physical Chemistry where she studied crystalline proteins. She had married Metchie J. Budka in 1950 and had become a US citizen. She then moved to the College of Physicians and Surgeons, Columbia University, New York in 1956, where she continued studies of protein structure.  She taught other crystallographers many details of the optimum experimental conditions of proteins in structural work, such as how or whether to lower the temperature. Initially she studied crystals of insulin and proinsulin, presumably as a follow-up of her work with Hodgkin. Her main work now involved neurotoxic proteins obtained in the very poisonous venom of sea snakes from the Pacific Ocean. The venom some produce is known to bind to the acetylcholine receptor and inhibit it. Her structural work on the three-dimensional structure of the neurotoxin sea-snake venom, erabutoxin, shows that it forms a three-finger-like structure that provides a concave surface to which the acetylcholine receptor can bind with disastrous consequences to anyone receiving a bite from the sea snake. This work has led to investigations by several scientists on the nature of the atomic interactions that lead to the inhibition of the acetylcholine receptor.

Barbara Low, as a researcher and teacher, inspiring many students, has made several important discoveries in biochemistry and medicine. She was appreciated for her careful research in the early days when X-ray diffraction studies were difficult and her later investigations on larger molecules have contributed to the greater efficiency of structure determination and our understanding of chemistry and physics today.