Indiana Jones and the Crystal Skull 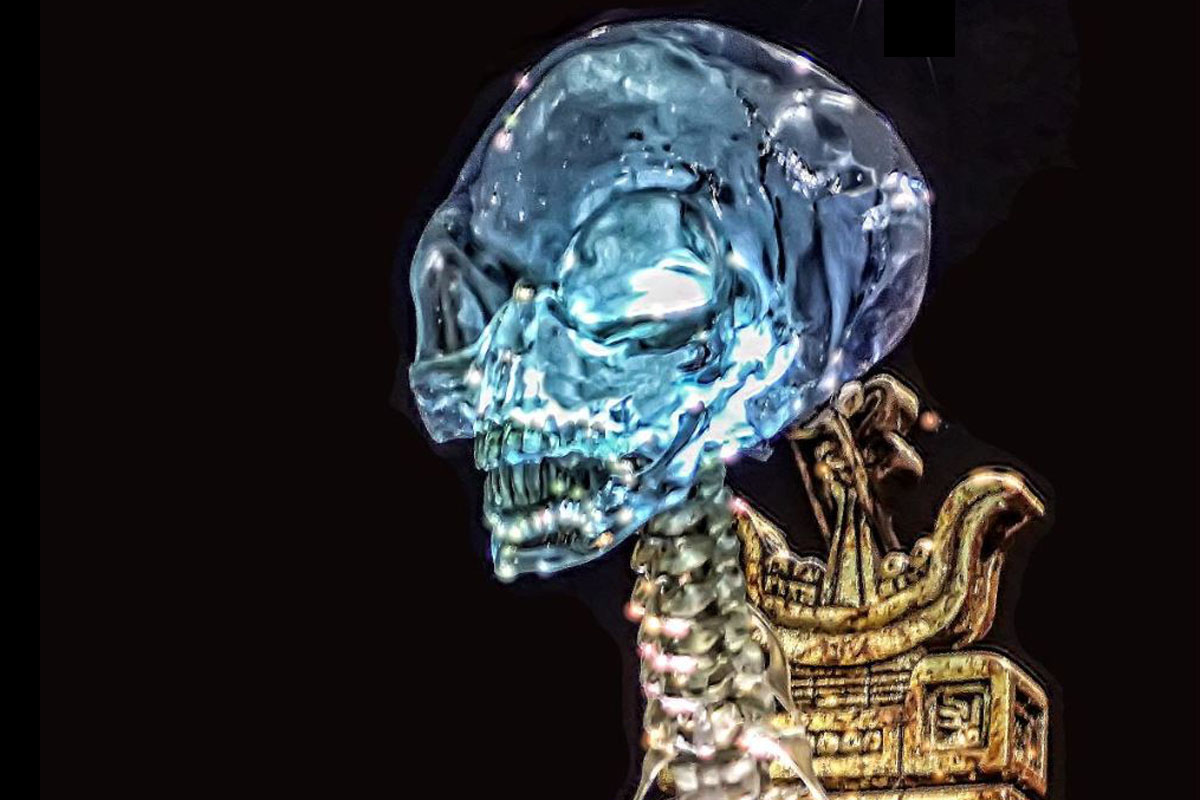 I like the Indiana Jones films. Ever since the first ark-full of surprises, each movie has absorbed me so much that I haven’t even touched the popcorn – although the latest instalment did leave me with a bitter taste in the mouth. Yet here I am not going to write about Indiana Jones and the Kingdom of the Crystal Skull (Frondel, 1966), but about the crystal of the skull.

In Romance languages, when you speak of “crystal”, most people think of glass windows, bottles or spectacles, and in English there is a related confusion with “crystal glass”. This is inherited from the Romans, who used transparent sheets of gypsum crystal in their windows. Back then, this gypsum was called Crystal of Hispania because it was extracted from the mines of Segobriga (modern-day Cuenca) in Spain. When plate glass was invented, Segobriga’s commerce collapsed, but the sheets of glass that replaced Hispania crystal continued to be called crystal. Hence the confusion.

Salvador Dalí once said that the difference between the best photograph of the Juan de Pareja and the actual Juan de Pareja portrait painted by Velázquez was exactly five million dollars. To paraphrase this brilliant artist, we can state that the difference between a carbon crystal – that’s to say, a diamond – and a piece of amorphous carbon is exactly the fortune that the diamond is worth. This is because, unlike the internal disorder of amorphous glass, the perfect order of the atoms inside a diamond crystal is what gives it its properties.

The skull from Indy’s latest adventure is made of quartz, a fascinating crystal of silicon oxide (Frondel, 1966; http://www.imdb.com/title/tt0367882/?ref_=sr_2; https://en.wikipedia.org/wiki/Quartz). If you make a circuit with a pair of copper wires, a small light bulb and a quartz crystal, and press the crystal firmly, the bulb will light up because the electrical charges of the crystalline structure move around, creating a voltage, briefly turning the crystal into a battery. This is how a gas lighter works: it carries a small quartz crystal, which, when struck sharply, generates an electric arc, a spark that – zap! – ignites the gas. Conversely, if an electric current is applied to the quartz crystal, it is imperceptibly deformed, and when the current is removed the crystal recovers its initial shape. If this is done in water, these elastic deformations of the crystal create a wave that spreads out until it hits another object, for example a submarine or the seabed, and the wave that bounces back deforms the quartz crystal again, which generates an electrical signal. If you measure the time the wave takes going out and back, you can learn how far away the seabed or the submarine is. Sound familiar? Yes, this is the sonar that ships use. This is also how oscillators, microphones and the pickups on electric guitars work. Furthermore, if you apply the electric current in pulses, the quartz crystal goes into resonance, as a tuning fork does, producing a frequency that is inaudible but so precise that it is used to regulate clocks and watches (http://www.quartzpage.de/index.html). You can read more about this so-called piezoelectric effect in the IUCr Newsletter (see https://www.iucr.org/news/newsletter/volume-26/number-2/some-musings-on-crystals-of-quartz). These are only a small sample of the properties of the quartz crystal ("The Quartz Watch – Inventors". The Lemelson Center, National Museum of American History, Smithsonian Institution. Archived from the original on 7 January 2009), added to which is the exquisite beauty of any of its varieties: the episcopal violet amethyst, the lemon-yellow citrine, the enigmatic smoky quartz or the limpid rock crystal. Some people, not content with all this, insist on attributing curative powers, magical properties, mysterious energies and whatnot to quartz, all of which are nonsense, but among them are those behind the entertaining little story of the skulls in the Indiana Jones film. 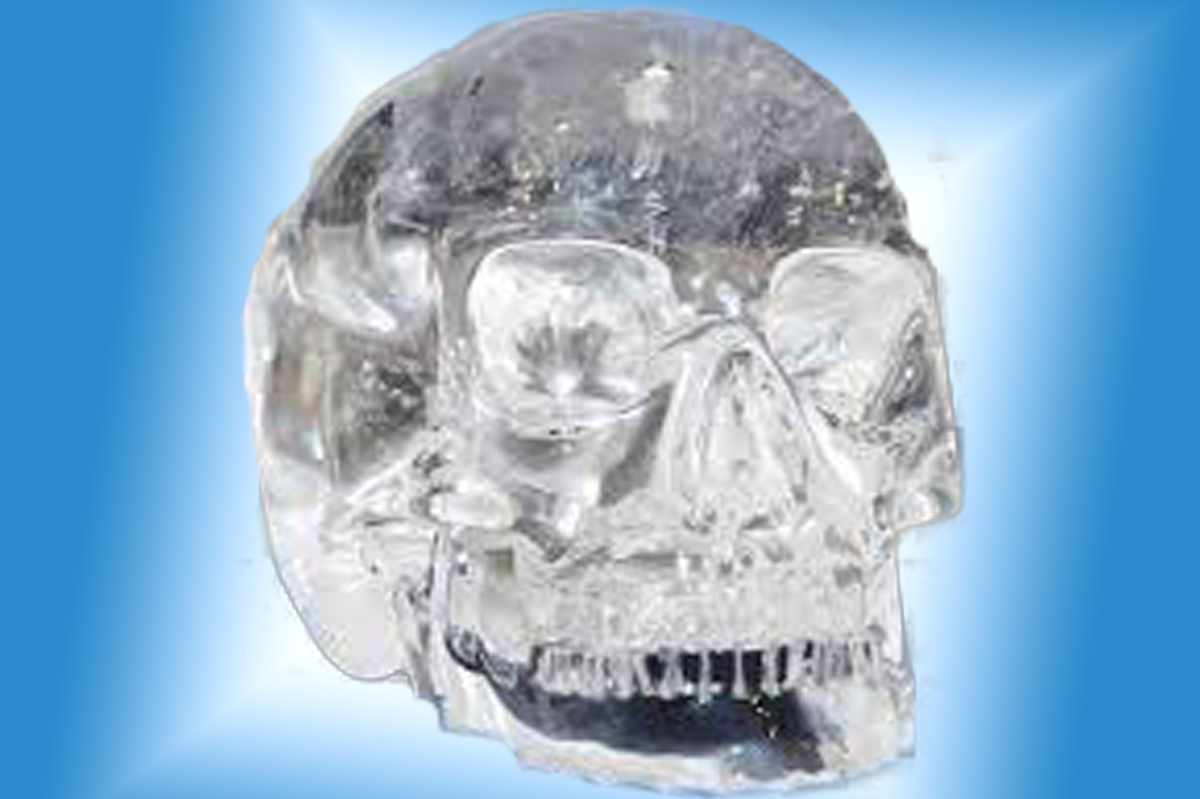 The enigma surrounding the crystal skulls is how such a perfect skull could have been carved in pre-Columbian times. The most famous and enigmatic skull was allegedly discovered in 1924 by Anna Mitchell-Hedges, adopted daughter of British adventurer and popular author F. A. Mitchell-Hedges (for more details see https://en.wikipedia.org/wiki/Crystal_skull).

Quartz crystals do not have preferred directions for carving (contrary to what is said in the film). Rather, when they are struck they break into concave pieces, just as glass does. They are thus easy to work with, despite their hardness, and polish well using the dust from quartz itself. In fact, the Romans, Greeks and Mayas created wonderful small carvings of rock crystal with the rudimentary tools they then had available. The making of the natural-sized “pre-Columbian” skulls, however, is more difficult to explain. Above all, if the fact that they are not truly pre-Columbian is concealed, then how can we know? Now, another fantastic property of quartz is through its thermoluminescence. It turns out that if you irradiate a quartz crystal, it creates defects in its structure. When the crystal is heated, the structure relaxes these defects, emitting light – the more light the more it has been irradiated. This is how the dosimeters used by hospital staff who work close to radiation sources function. In nature, cosmic rays are the sole source of irradiation, so if you heat a crystal quartz you can find out how long it has been exposed to those rays – that is, you can find out how old it is. Thus, we are able to detect that the crystal skulls were made no more than a century and a bit ago, with modern carving technology. In other words, they are a fraud (see https://www.iucr.org/news/newsletter/volume-27/number-1/more-fun-with-quartz-crystals!). But let us not let the truth spoil a good story! So let’s suppose that the crystal skulls were made 3000 years ago. If the indigenous peoples did not make them, then who did? Of course! The only possibility can be that they were the work of extraterrestrial beings that visited the Incas, Mayas or Aztecs in order to pass on their knowledge and power. I find this absurdly difficult to believe, because every time I try, the ghost of a disbelieving Aztec appears before me – there have always been non-believers – prostrate in the ruins of Tenochtitlan, cursing his gods and muttering, “all those lasers, all that high technology, all that crystal skull and such…. If those alien morons had shown us the wheel then we really could have shown those bearded invaders from across the pond what an obsidian blade is worth!”

As there is so much talk about the magic of crystals, I promise some time to write about it. But let me emphasize that if you are seeking mineral crystals with power, the only ones that are truly powerful are diamonds and emeralds. Believe me. Word of a crystallographer. 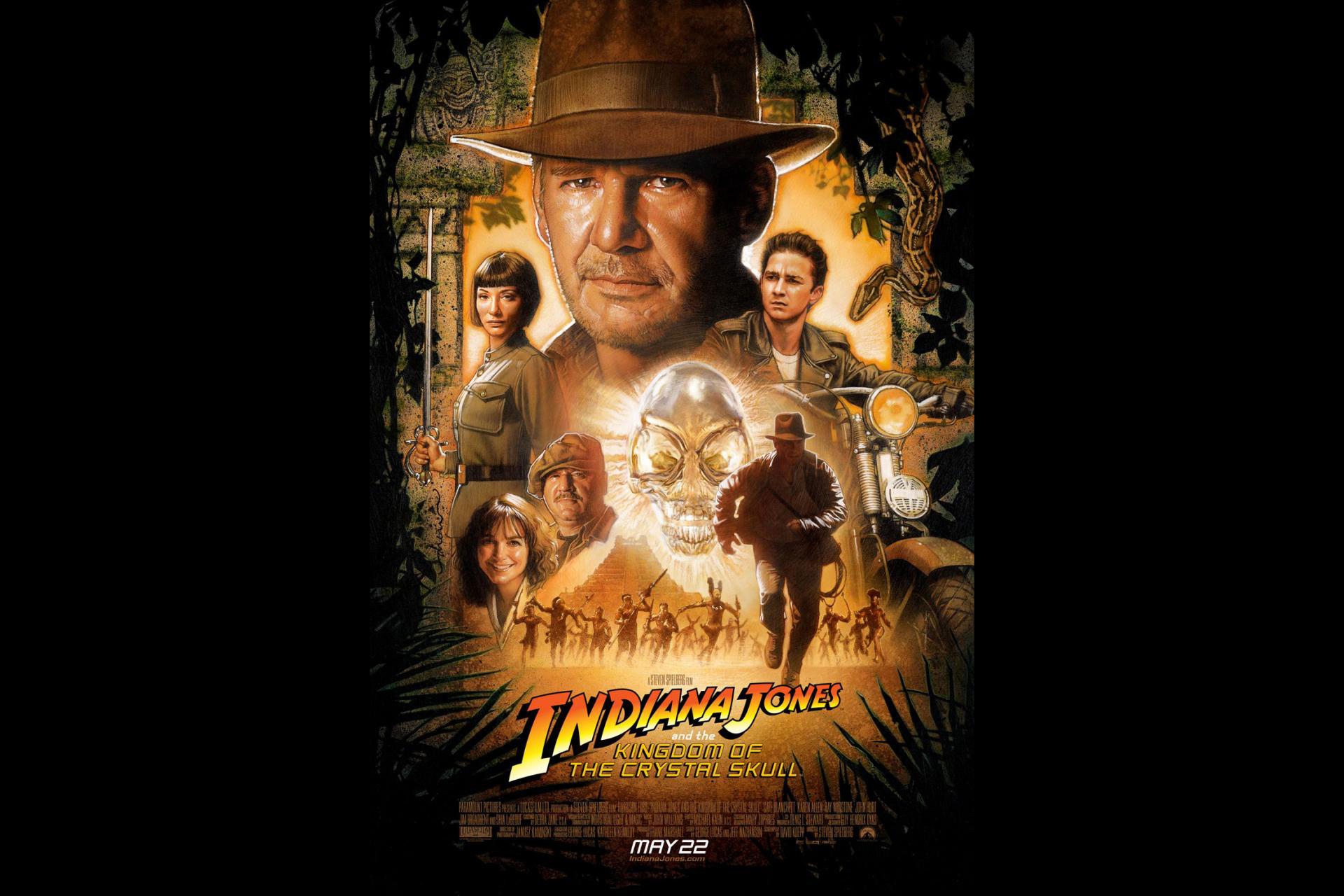 Why have I chosen this film for the teaching of crystallography?

You may wonder why I have chosen this film for a series on crystallography and cinema. The reason is twofold: first, because it is an excellent film that is about a skull made out of rock crystal, also termed quartz; second, because it employs the crystal as an object with magical powers, making use of that historical and universal tendency to believe that crystals possess a mysterious energy with beneficial healing powers.

The investigation scientifically revealing the fraud of the false Mesoamerican crystal skulls, which is the story the film is based on, can be found in the article by J. M. Walsh (2008).

A good summary of the properties of quartz is the article in Wikipedia on this mineral: https://en.wikipedia.org/wiki/Quartz. Another excellent website on quartz is http://www.quartzpage.de/index.html.

I also encourage teachers to use the website of the exhibition CRISTALES “A WORLD TO DISCOVER” (http://www.cristallografia.org/contenuto/articolo-cristales-a-world-to-discover-an-exhibition-for-schools-and-universities-ad-accesso-libero-su-j-appl-cryst/773), which is written in English and Spanish. On this website, students will find information about crystals and their properties, as well as about crystallographic methods. The posters and panels of the exhibition can be freely downloaded to be displayed in schools and universities.

A link to the Indiana Jones film’s technical specifications on IMDB can be found here.

Part of this article is an English translation of an extract from the Guía de la Cristalografía en el cine by Juan Manuel García-Ruiz and Martha Santana. This guide can be downloaded from Fundación Descubre at https://clickmica.fundaciondescubre.es/files/2017/02/guiacristalografia.pdf.