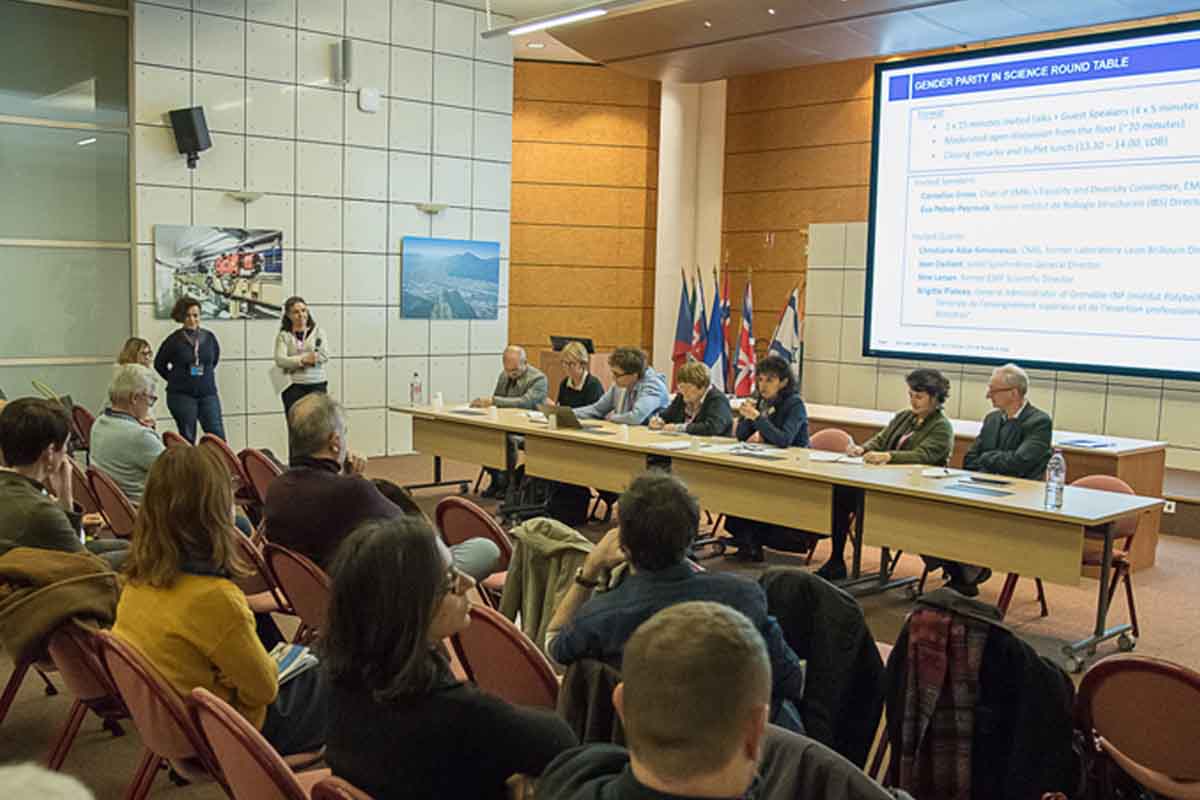 A roundtable on "Gender parity in science" was organized at the European Synchrotron Radiation Facility (ESRF) by the ESRF User Organization during the first day of the annual User Meeting (4 February 2019). This was the first time that an event on the subject had been hosted at the European Synchrotron, and the presence of about 80 participants in the Auditorium (~25% men) surpassed our expectations.

The aim was to debate questions such as what slows down the progression of women's careers, considering that women and men with the same qualifications often do not have access to the same career path, and can different recruitment strategies improve women's success rates in job interviews. Furthermore, what actions can institutions carry out to help break the glass ceiling and reach the needed gender balance?

Guests were asked to comment on their working conditions and to discuss if any measures were implemented in their institute to balance between private life and the professional career.

C. Gross and E. Pebay-Peyroula opened the roundtable with two 15-minute talks, and the ESRF Head of Administration presented statistics on women's presence at different scientific career levels in the Experimental Division of the ESRF, indicating the presence of a glass ceiling effect.

C. Gross, as chair of the EMBL Equality & Diversity Committee, gave a talk on “Perspectives on Gender Balance at EMBL” that, along with statistics, illustrated how EMBL is trying to improve its recruitment and employment policies. Among its actions in this direction, it supports proactive solicitations, a dual-career pilot project, and childcare and on-site nursing rooms. More generally, it tries to promote diversity among role models (speakers and mentors) and resist stereotypes in our general culture. EMBL’s results in terms of recruitment were impressive.

E. Pebay-Peyroula’s contribution gave a historical perspective by showing the evolution of the role of women in science since Rosalind Franklin. She commented on women's situation (stereotypes, judgments, differences) in family, school and higher education from the 1930s and 40s to now. As Director and evaluation panel member, she was able to give a personal view of evaluating and self-valuating excellence in science, questioning the benefits of “good examples” and/or “too good examples” with the provocative query “Is Marie Curie a good example?” for women in science.

Guests completed the discussion with personal testimonials, examples of actions in their institutes and an update on current French regulations.

The roundtable was animated by Giovanna Fragneto and Nedjma Bendiab from the “Parité-Science” Association, a French association that strives for parity in scientific and technical professions, and generated a rich debate within the public. The consensus was that gender parity in science could be achieved with proactive actions of the administration of our institutes, together with national policy and a personal stand against stereotypes.