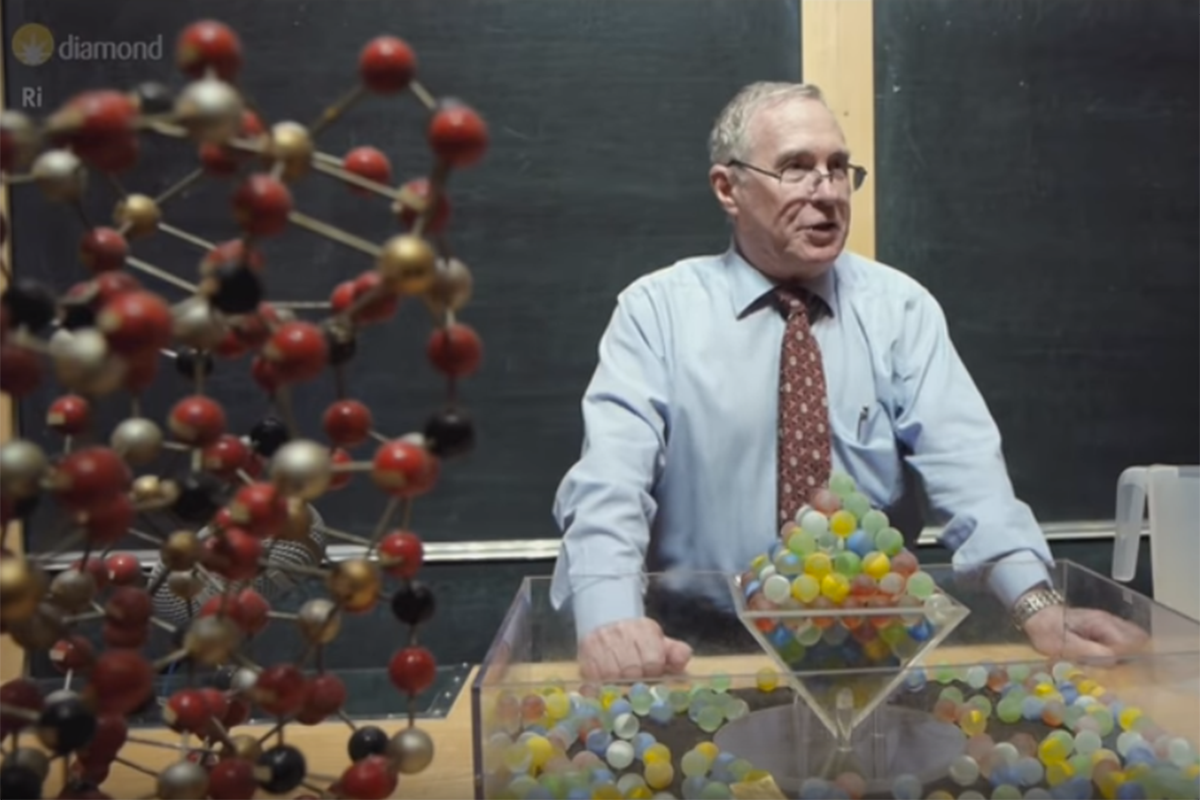 It is well known that Lawrence Bragg was especially adept at presenting science to an audience in many ingenious ways and yet, at the same time, with great simplicity. In fact, he was particularly in his element when demonstrating to young people, saying “never talk about science, show it to them". I was fortunate enough to have been one of those teenagers who was able to attend his lectures at the Royal Institution in London, UK, and those occasions have stuck in my memory ever since.

When I moved from the Cavendish Laboratory, Cambridge, UK, to the Clarendon Laboratory, Oxford, UK, in 1976, I brought with me almost all of the crystallographic equipment plus many items of interest that dated from the days when Bragg had been the Cavendish Professor. These are now on exhibit in a small museum I set up some time ago in the Clarendon. In a previous issue of the IUCr Newsletter, I used one of the prototype boxes of Beevers-Lipson strips from my museum to explain how they were used (see https://www.iucr.org/news/newsletter/volume-26/number-1/how-did-they-do-that-beevers-lipson-strips). 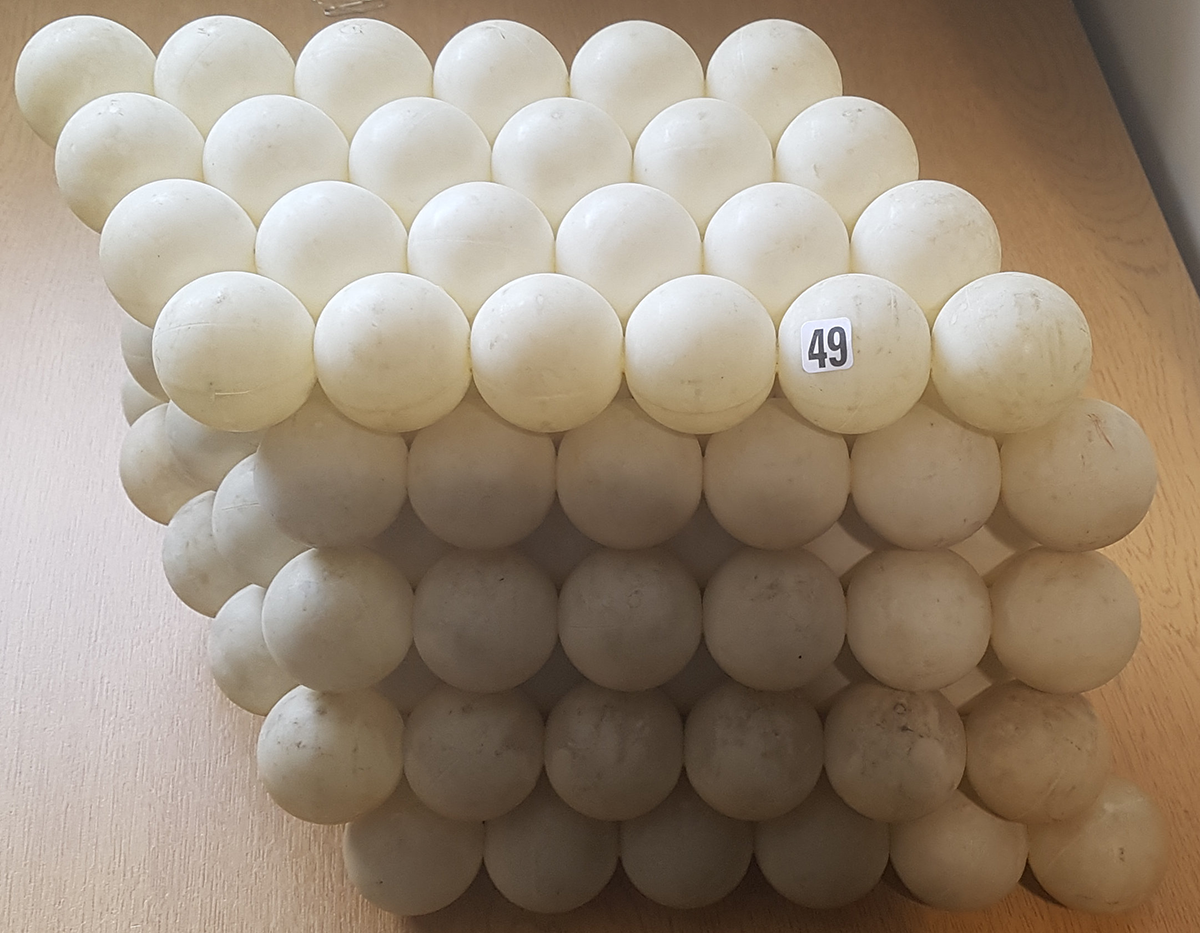 Bragg was very keen on lecture demonstrations and, because he was clever with his hands, he made a number of items himself. In particular, he made use of ping-pong balls to illustrate how atoms pack together. Figure 1 shows one example from my museum: simple rafts of ping-pong balls to demonstrate how the structures of metals can be understood in terms of close-packing and how dislocations can form. You can see Bragg using this model in a video made in 1952 here and here.

Figure 2 is a nice variant in which four small rafts of ping-pong balls can be stacked together in the sequence ABCA to form a crystal in the shape of an octahedron. This simple demonstration is great for explaining to a student how cubic-close packing is created with this sequence and where to find the threefold and, more importantly, the locations of the fourfold (i.e. cube) axes.

In Figure 3 is a ping-pong model showing the crystal packing of molecules of naphthalene. Here Bragg has painted the balls black to represent carbon atoms. I recall being told by a technician at the Cavendish that this was one of Bragg’s favourite models. I am not sure when this was made but there is a photograph (Figure 4) of Bragg in Manchester in 1936 holding a model that looks suspiciously similar. 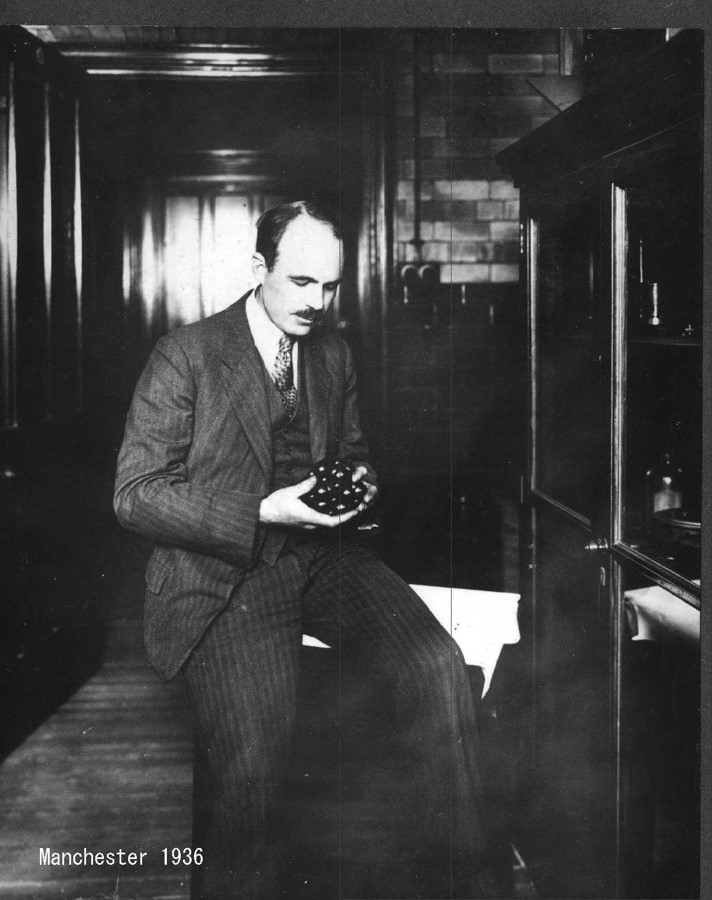 Finally, there is an interesting demonstration of how crystals grow using marbles to represent atoms. This was filmed at the Royal Institution by the BBC in a series entitled The Nature of Things, presumably in the early 1960s (see here). Although the audience consisted primarily of adults, it was aimed at children and broadcast on children’s television. Bragg, acknowledging the idea by John Desmond Bernal, starts with an ordered array of marbles contained within a plastic inverted pyramid acting as the bottom half of a crystal. He then pours more marbles on top and, as if by magic, the top half of the octahedron is formed. I remember being impressed with this demonstration and a few years ago I decided to reproduce the model. 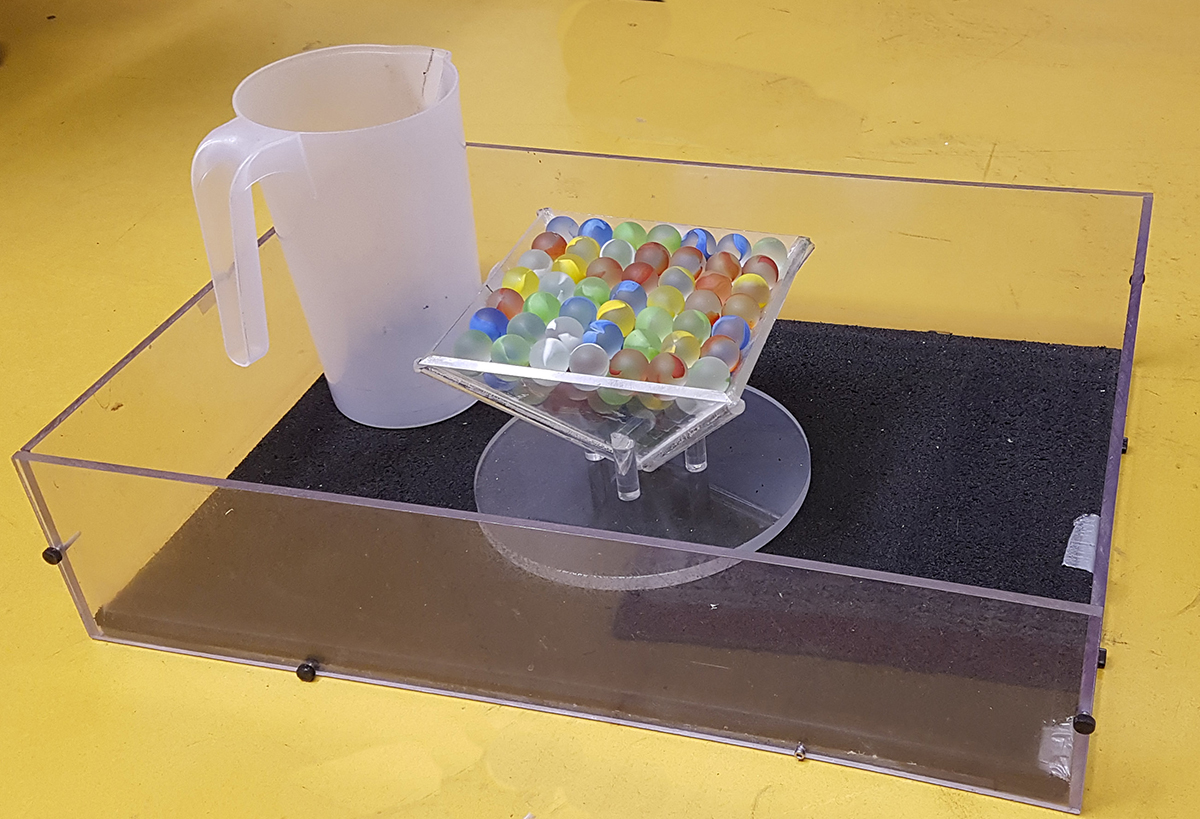 Figure 5 shows my construction with marbles filling the semi-octahedron onto the (100) face. One thing that I noticed was that Bragg had to guide the flow of marbles somewhat with one hand, and I suspected that this was because his marbles were all shiny so that they tended to slip too much. However, I found that one can buy 22-mm frosted marbles. In order to determine the number to purchase, a useful formula for the number of spheres that can be packed into an octahedron (known as the octahedral number) is given by O = n(2n2 + 1)/3, where n is the number of spheres along an edge. In my case I decided to have seven marbles on the edge, giving a total of 231 (expensive!). I added another 100 marbles (even more expensive!) to cater for any overspill. To construct the octahedral base, I cut four equilateral triangles of side 7 by 22 mm = 154 mm out of Perspex (Plexiglass) and glued them together (after chamfering the edges to make it look pretty). Four plastic support pillars were then glued at the bottom to enable the inverted pyramid to stand upright. I also constructed a large plastic surround box to collect all the spilt marbles. Figure 6 shows how this looks after pouring marbles randomly on top. 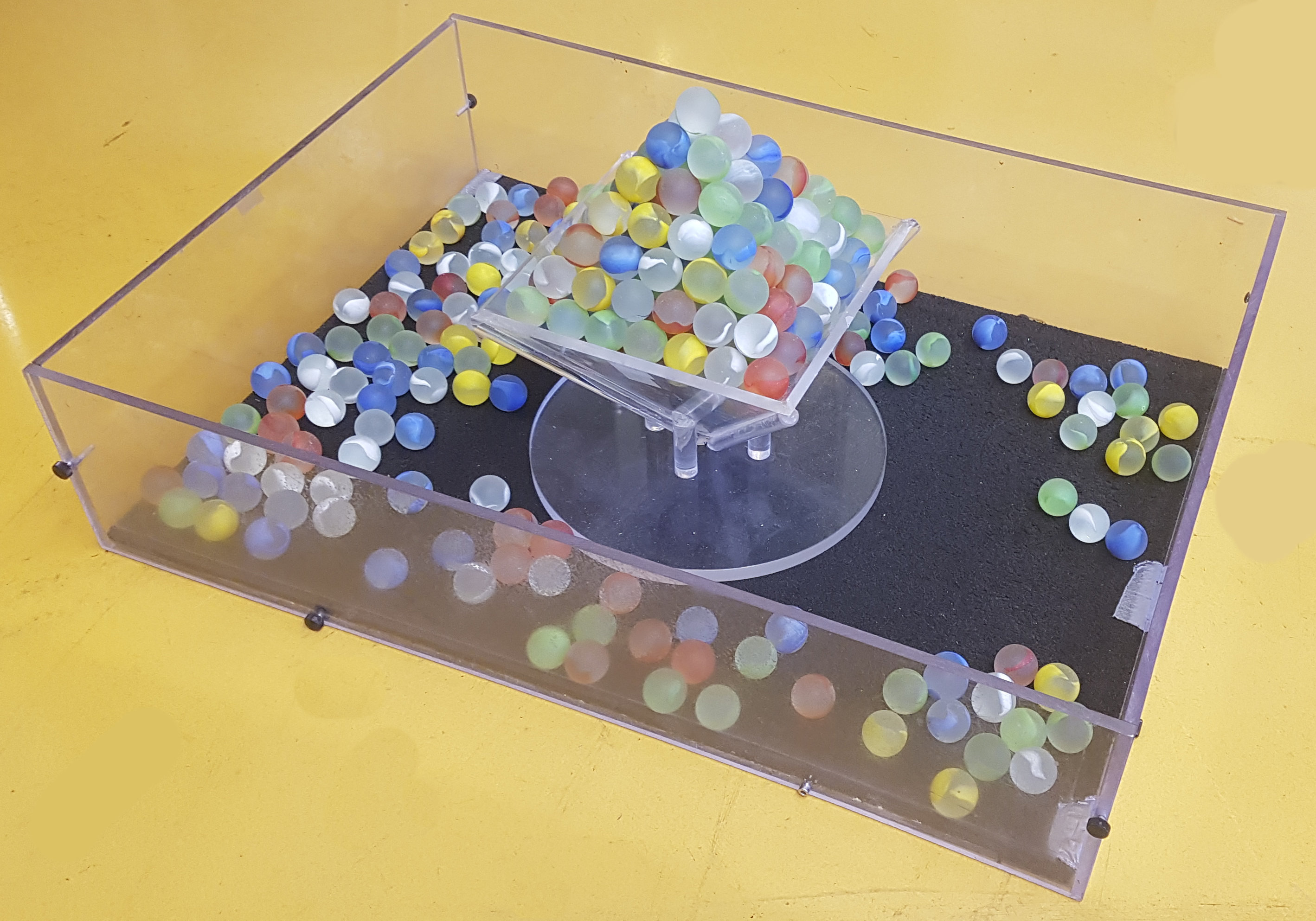 Figure 6. After pouring marbles on randomly to form a perfect octahedron.

You can see this in action in a film made during the 28th European Crystallography Meeting held at Warwick University, UK, in 2013, or in Figure 7 (with permission of Kathryn Boast, University of Oxford). Because the marbles are frosted, little guidance is now needed to get the top half of the octahedron to grow. I have used this demonstration with excellent success at schools and fairs. It is interesting to get the children to pour the marbles by themselves and then see their surprise at the result. For adults and older children, I usually start by asking them to guess what will happen when we pour the marbles on. Would the result be a random disorder, or an ordered arrangement? And what shape would be formed, if any? It is fascinating to see their expressions of wow! when they see what happens.

Figure 7. Extract from a video by Kathryn Boast (Oxford).

The reason that this works is interesting. First of all, gravity acts a bit like an attractive force holding the marbles (atoms) together and their physical size acts like a repulsion term. The first point to note is that if one starts with an ordered array, then there is a tendency to continue in an ordered fashion as each marble fits into the spaces between the marbles below. The magic formation of the octahedral {111} faces occurs because the density of packing of the spheres on these faces is approximately 15% higher than on the original (001) face. Atoms like to get as close together as possible to minimise their interaction energy by balancing attractive and repulsive forces. Have fun with this!